Ireland with Mr. and Mrs. Hall

A behind-the-scenes look at part of the exhibit “Rambles, Sketches, Tours: Travellers & Tourism in Ireland.”

Samuel Carter Hall (1800-1889) met Anna Maria Fielding (1800-1881) in 1823 and they were married in September of the following year in London. Although both had been born in Ireland to Anglo-Irish families, they pursued their careers in England. Samuel Carter was a journal editor and writer who participated in a dizzying array of activities from 1823 to 1830, at which point he suffered a brief nervous affliction. He soon recovered and rejoined the editorial game, eventually finding some level of stability as sub-editor/editor at the New Monthly Magazine. Anna Maria’s career as a writer took off in 1829 with the publication of her first book, Sketches of Irish Character, which contained reminiscences of her childhood in Ireland. She subsequently published a number of children’s tales, novels, plays, essays, and more Irish stories. 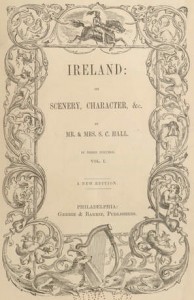 The Halls made many tours of Ireland and penned an initial account of their travels that appeared in three volumes from 1841 to 1843. Ireland: its Scenery, Character, &c. was hugely successful in Great Britain. The Halls continued to tour Ireland after the publication of their account, and continued to update information in subsequent editions. In the 1850s, they capitalized on the popularity of their work even further by breaking it into regional sections—such as, The North and Giant’s Causeway—and publishing them separately. These regional guides were a much more manageable size, fitting right in with the popularization of “handbooks.”

Falvey Library’s Special Collections owns two multi-volume editions of the Halls’ Ireland (from the 1860s and 1911), as well as two of their regional guides, and I used all of these in my exhibit. “Rambles, Sketches, Tours” features eight images from the Halls’ works—can you find them all?