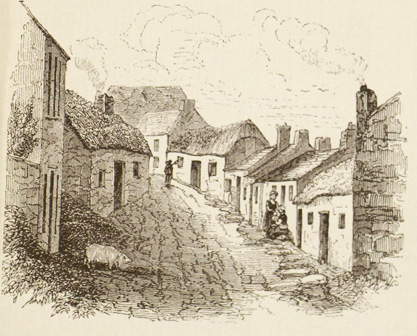 Tour Ireland through the centuries with Laura Bang, Special and Digital Collections curatorial assistant, as your guide. This travel and tourism exhibit includes unique works from Falvey’s Joseph McGarrity Collection and can be viewed throughout the fall semester in Falvey Memorial Library and online through the Digital Library.

Because of her interest in travel writing, Laura “had a lot of fun doing the research” for her inaugural exhibit at Falvey. In fact, the exhibit was suggested as a possible project to Laura during her job interview.

“Rambles, Sketches, Tours” begins in two display cases on the first floor. In the first case we are introduced to the exhibit by the “Curator’s Welcome” and find three books on display: Francis Guy’s Tourists’ Handbook to Cork, Killarney and the Blackwater, 1890, opened to the title page and opposite an advertisement for the Imperial Hotel in Cork; John Gerard O’Leary, Ted Smart, and David Gibbon, Ireland, its Beauty and Splendor, 1979, which shows color illustrations of castles (interiors and exteriors), burial grounds  and a church; and Jane Barlow, Irish Ways, 1911, opened to show a color landscape. 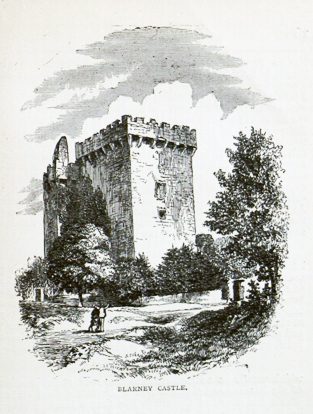 Continuing on the second floor, the viewer travels through “Getting from Here to There, “Guidebooks and the Tourist Industry,” “Politics and Pleasure,” “Killarney, Cork, Dublin, Ulster,” and “Along the Border,” the thematic organization for the exhibit. Each case contains books open to illustrations or maps accompanied by explanatory placards filled with fascinating details.

Laura tells us that, “Before the advent of steam engines, getting to your destination was an adventure in itself” and that travelling “from London to Dublin could take more than a week.”

The earliest work displayed is a small volume by William Petty and Francis Lamb, A Geographicall [sic] Description of the Kingdom of Ireland, published in London, perhaps in 1689. Here we see a map of Great Britain and Ireland. Other books shown come from the 1700s, 1800s and 1900s.

One book from 1769 has a title that fills the entire page: John Bush, Hibernia Curiosa .A Letter from a Gentleman in Dublin, to His Friend at Dover in Kent…. There are numerous other fascinating books to view and enjoy.

Laura notes that the well known Baedeker guide books (first published in 1827, with English versions published from about 1878) did not include guides to Ireland in English although there were guides for England, Wales and Scotland. The works included in this exhibit “are largely from a British perspective due to the specific holdings of Special Collections” and because the majority of travel accounts were “written by British and Anglo-English authors.” (Curator’s Welcome)

Come to Falvey and take a tour of Ireland.