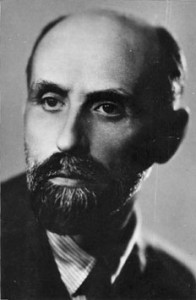 This lecture builds on earlier library events dedicated to Jiménez. In the spring of 2009, Dr. Juliá worked to organize a symposium on the author and was instrumental in bringing to the Library a detailed exhibit about his life. She praises Jiménez’s versatility: “There is a Juan Ramón for every taste: an endearing poet very much like a child, a romantic poet in love with nature and love itself, a metaphysical poet in search for God and the absolute, a postmodernist poet desperate and broken because he is unable to find answers to his mortal quest.”

In addition to serving as professor and chair of the University’s Romance languages and literatures department, Dr. Juliá is among the world’s leading Jiménez scholars. Darren Poley, outreach librarian, comments, “She is a teacher and scholar of the first order who has dedicated most of her professional career to the study and translation of the Spanish poetry of Jiménez… She was awarded by Jerez, her birthplace in Spain, the Prize of Excellence, October 2009, for becoming the preeminent and internationally renowned expert on the 1956 Nobel laureate in literature.”

That scholarly tie to her birthplace is very important to Dr. Juliá, who says that she began reading Jiménez during her childhood, and has kept his works close to her ever since.

Juan Ramón Jiménez contributed to modern poetry the idea of “la poesía desnuda,” or “naked poetry,” free verse stripped of extraneous matter and therefore purer in nature. After fleeing Spain following the outbreak of the Spanish Civil War, he lived in exile until the end of his life. De la nueva luz examines the impact of this exile on his late work, which contrasts with his earlier “poesía desnuda.”

“I found his last poetry very difficult to comprehend, especially when compared with his earlier works,” Dr. Juliá notes. “His last poetry was intriguing to me. It became a challenge, especially because this poetry was for the most part unpublished and not understood by the majority of critics and readers during the eighties. Therefore I started studying it and since then I have devoted over two decades to unraveling the latest books of Juan Ramón Jiménez.”

The lecture is free and open to the public. It is approved for Augustine and Culture Seminar (ACS) co-curricular event credit.

For those interested in reading Jiménez, Dr. Juliá suggests beginning with his Third Poetic Anthology. “This is a book that he himself prepared at the end of his life, and it is composed of some of his best poems from different epoch,” she elaborates. “The sensitive reader can find his/her Juan Ramón and then read the books of the period of those poems to begin entering into Jiménez’s poetic world.”