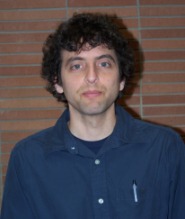 Stephen Spatz, assistant outreach librarian, was one of three winners for the April crossword puzzle contest, “Alphabetical Inserts,” in Harper’s Magazine. The announcement is in the June issue. Each month winners are selected from the first three randomly chosen correct solutions sent to Harper’s. Each winner receives a one year subscription to the magazine. Stephen has been sending his completed crossword puzzles to the magazine for several years and was pleasantly surprised to be called by the puzzle editor telling him he was a winner.

Stephen said, “This is how I relax.” Stephen has been working crossword puzzles since he was in the fourth grade when he did them with his father. Stephen’s other hobby is writing and recording music.

The Harper’s crossword puzzles are cryptic, a complicated and difficult type of crossword puzzle  in which the whole puzzle has a theme and the clues are themselves puzzles which must be solved to get the correct answer.

Article and photograph by Alice Bampton