“One of these days how ridiculous will all this appear”

A recent addition to the Digital Library is the friendship book of Cornelia Fletcher. This is a blank album in which affectionate friends and relatives wrote selections of poetry and prose they thought Cornelia might enjoy—sort of akin to both a commonplace book and the notes one finds in yearbooks. Most of the selections are works by popular authors (with or without attribution!), but several appear to be original. In addition to poetry and prose, there are also several artistic works, including pen-and-ink drawings, watercolors, and colored sketches.

The earliest entries in Cornelia’s friendship book are dated 1828, with the latest date being 1842—though many of the entries are not dated. Although, as noted, the majority of selections are not original, there are some noteworthy entries. The entries inscribed by “J.A.C.”, for instance, are most likely from Cornelia’s husband, Joseph Ashmead Clay. “J.A.C.” appears several times throughout the book, having selected for contribution several poems by George Herbert. Although one might expect these entries to have been written during their courtship, all of Clay’s entries are dated 1840—five years after his marriage to Cornelia! (As an example, see Herbert’s “Vertue” on page 89 of the album.) On a sadder note, there are two poems about the death of an infant on pages 181 to 185 of the album. These poems, dated June 1842 and without a signed inscriber, perhaps offer a glimpse of Cornelia’s own grief upon the loss of a child. 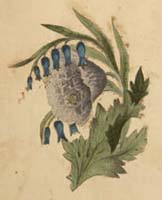 My favorite inscription, however, is a note on page 12 from “C.H.P.”, dated 1831. The note begins with: “If there is one thing in this world that I dislike more than another, it is a Young Ladies Album, and a more decided bore I never suffered in my life than writing in one.” Despite these opening sentiments, the author was clearly fond of Cornelia, and grudgingly accepts the “necessary evil” of inscribing something to be remembered by.

Cornelia Fletcher’s personal history is not easily traced in great detail, but I have found that she was a daughter of Noah and Elizabeth Fletcher, born in 1814 in Washington, D.C. She married Joseph Ashmead Clay, a prominent lawyer of Philadelphia, on 12 March 1835 and presumably moved to Philadelphia with him at that time. Cornelia died in Philadelphia on 24 December 1880.

The original manuscript is also available for use in the library Rare Book Room. 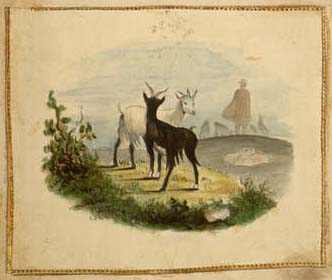 For information about Joseph Ashmead Clay (and several other generations of Clays), see Cecil Clay’s The Family of Clay, of New Castle, Delaware & Philadelphia, Pennsylvania (1895), available from the Internet Archive here.