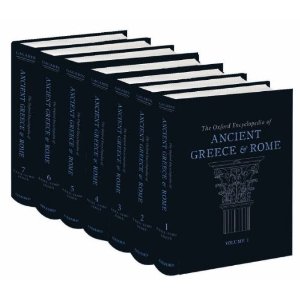 Falvey patrons now have access to the online Oxford Encyclopedia of Ancient Greece and Rome which contains contributions from 500 authors. Entries cover the Bronze Age (3000 BCE) through the era of Emperor Justinian (600 CE). The Encyclopedia contains topical outlines on Rome and Greece, numerous illustrations, maps, and genealogical tables. Primary sources and annotated bibliographies of mostly English secondary titles are provided with the articles; most articles also include helpful cross-references. While the writers are usually authorities in their fields, their intended audiences are college students and educated laypersons.

Additional online resources in the field of ancient history:

Did you know that Oxford Reference Online includes time lines of ancient Egypt, Greece and Rome? Each date and event listed on these time lines is linked to entries in relevant online Oxford reference titles.

All titles are all available through the Library catalog. Please feel free to contact us with any questions or comments that you may have.
Contributed by Alice Bampton.