“Poetry’s energy connects us to one another.” So began the English department and Falvey Memorial Library’s fifth annual Open Mic Poetry Reading on April 8. Judy Olsen, this year’s master of ceremonies, welcomed students, faculty, staff and guests to the event, held in the Library’s first floor lounge. Ms. Olsen, the librarian liaison to the English and theatre departments, and also the Publications and Communication librarian, introduced senior class member Christine Simmons. 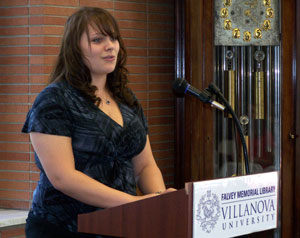 Cayce Lista, a senior, kicked off the poetry reading with two of her poems, “Kingussie Bound” and “Peninsular.” “Traveler,” which is featured in Arthology, was written and read by Christine Simmons. Next, Gerald Dierkes, a library staff member, read two works by poet Dessa Crawford: “Choices” and “Clone.”

Mathematics professor Timothy Feeman, Ph.D., shared his poem about the rhythms and hums different road surfaces produce while he’s riding his bicycle, and the different songs of which those sounds remind him.

Christina Hansen, a contributor to Arthology, read “Out of Mind, Out of Sight,” written by China Echo. She was followed by library staff member Laura Hutelmyer who read “Wordsworth’s Skates” by Seamus Heaney and “Anti-Love Poem” by Grace Paley. Zachary Hayes, a senior, read “kurt vonnegut’s blueberry oatmeal pancakes” and “the patient stargazer,” both of which appear in Arthology.

After a break in the action, during which attendees socialized and enjoyed refreshments, Emily Southerton, a senior and Arthology contributor, stepped up to the microphone to read two of her poems. And Mosetta Harris, also a senior, shared a poem of hers. Christine Simmons and Zachary Hayes each returned to the open mic to read the event’s final poems.

As the readings progressed, both readers and listeners appeared energized by the presenters’ creativity and passion for poetry. They eagerly picked up their copies of Arthology.

Congratulations to Emily Southerton, who has been selected Senior Class Poet for 2010. Honorable Mention awards go to Zachary Hayes and Christopher McKay.