The 8,000th title is from the Joseph McGarrity Book Collection, it is a newly purchased book from 1911: Standing rules and regulations for the government and guidance of the Royal Irish Constabulary, the Irish police force prior to Irish independence. This is a wonderful read for any interested in the historical organization of police forces, crime, horses, and reading and social prohibitions. 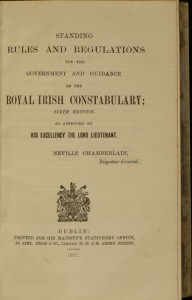 From page 272 of this work, Newspapers:

1203. Reading Unrestricted: Members of the Force are not restricted from the reading of such books or other publications as they may think fit, provided they are not offensive to morality, or loyalty, or subversive of discipline.

1178. Description. – Mounted Men are to be selected for their superior activity, general intelligence, and predilection for horses and the mounted service; and they are not to be dismounted without authority from the Inspector-General; they are not to be over twenty-six years of age, or five nine and a half inches in height; and are not to exceed 11 stone in weight.

The count of items in the entire Digital Library is updated as each item is added to the collection and is viewable.