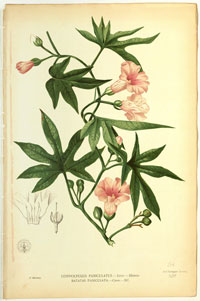 Two glass cases of botanical prints, next to the first floor elevator, provide a tempting introduction to this visually rich exhibit. Go to the second floor to see the full display of large colorful botanical prints from Flora de Filipinas. Written by Rev. Manuel Blanco, O.S.A., “the premier botanist of the Philippines,” Flora de Filipinas is the culmination of his study of the 1200 plants he collected during his forty years in that country.

The bulk of the exhibit – twelve cases – is on the second floor in front of Special Collections. Here you will find numerous large color prints featuring plants identified by their botanical names; in some, there are also small line drawings of details.

Flora de Filipinas was first published in 1837 and, because of its popularity, a second edition was published in 1845, followed by a third, deluxe seven volume posthumous edition, published between 1877 and 1883.

The color lithographs on exhibit are line drawings filled with colors ranging from white through delicate pastels to intense reds, an occasional blue, and, of course, the full spectrum of greens. (To learn more about lithography see Grove Art Online.) 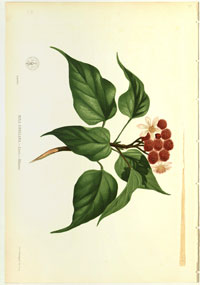 Father Blanco was born in Zamora Province, Spain, on November 24, 1778, and joined the Augustinian Order in 1795. He was ordained in 1805 at age twenty six and was sent to the Philippines where he served until his death in 1845. He served as a parish priest in various parts of the country; he then became Provincial Counselor (1825-1829), General Treasurer of the Province (1830-1833), Rector Provincial (1833-1837), and Prior of Guadalupe (1839-1845). Although now known as a botanist, during his lifetime the priest was recognized for his humility and modesty.

While Father Blanco’s scientific work is well documented in the three editions of Flora de Filipinas, the local Filipino artists who actually made the original drawings remain unknown. What we do know is that their colored drawings were sent to a lithographer, C. Verdaguer, in Barcelona, Spain. In Barcelona the drawings were copied onto lithographic stones, probably by L. Guerrero whose name appears on the lower left of each print, and printed for inclusion in the books that were published in Manila. After six hundred copies of each plate were printed, the plates were destroyed, thus making Falvey’s copy one of a beautiful limited edition. 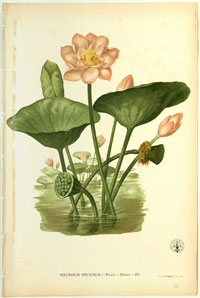 Both a first edition and a third edition of Flora de Filipinas are housed in Falvey’s Special Collections Augustiniana collection. However, the first edition’s poor physical condition makes it unsuitable for exhibition, but the third edition’s illustrations provided the prints for the current exhibition. Because the color lithographs were rapidly deteriorating, those volumes were unbound, cleaned by a professional conservator, and then housed in acid free wrappers. This conservation process made it possible for Bente Polites, Special Collections librarian, to mount this exhibition of loose prints for our enjoyment.

Included in the exhibition are three of the four bound volumes of text; one volume is closed and two are open. One of the open volumes shows an engraved portrait of Father Blanco on the left and on the right the beginnings of his bilingual biography (Spanish and Latin). The other opened volume shows an intricate frontispiece.

The Flora de Filipinas is a scientific work, as Father Blanco used Linnaeus’ system of plant classification. However, the colorful lithographs on exhibit allow us to walk among the nineteenth century Philippine flora, and we can enjoy these plants just as Father Blanco must have. The Garden is on exhibit until Nov. 20, 2009.

In addition to Falvey’s paper garden, the real “Father Blanco’s Garden,” a serene and inviting site, remains open to the public at the San Augustin Monastery in Intramuros, Philippines.