Oh, the Humanity!: Time travel and the search for the “human” in the “history” within the pages of S. A. Lane’s autobiography

Allow me to introduce myself. My name is Johanna Hibbs and I was the 2008 Fall Father Thomas Middleton Intern for the Falvey Memorial Digital Library and, boy, what an internship it turned out to be! 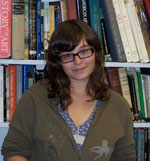 From handling rare manuscripts to writing Wikipedia articles, my time spent here at Falvey was never rife with tedium nor was it forgettable. I had always pictured the life of an intern to be that of toting hot beverages to the “higher-ups” and making friends with a copy machine for four months, but I would soon realize that this internship was not only a chance to gain experience within an academic, therefore intellectually charged, setting, but I was also able to do something most of my peers miss out on: Time Travel.

Yes, here, at Falvey Memorial Library, one is able to travel through time and witness living, breathing history as I did during my hands-on involvement with the transcription and digitization of one 19th century American: Samuel Alanson Lane and his hand-written autobiography.

This leather bound manuscript of former mayor and local historian of Akron, Ohio was graciously lent to the Digital Library this past year. As a former graduate student who had been recently graduated from the Humanities program at Arcadia University, this project was pure intellectual gold! Fully transcribed and scanned in color at 600 dpi , this 450 + page manuscript offers a “slice of life” look at 19th century life through the eyes of an average American man, who lived in a not-so-average time and is available for the public on the Digital Library’s website.

My journey back in time started with small steps as I was initially given the task of transcribing the words of Lane’s manuscript into a reader-friendly Word document. 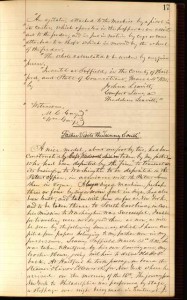 At first, deciphering Lane’s handwriting was somewhat challenging as his style of script was, at times, confusing, with some letters appearing as others but as I would soon discover, reading his writing would become as natural as reading my own. This growing sense of familiarity towards Lane’s writing would soon trickle over to the man himself, as I became more and more engrossed in his life’s tale. What started as mere word-for-word transcription became more of a weekly fix of Americana to satiate my hunger for history and quench my thirst for a touching narrative. Therefore, it was not the least bit shocking when I decided to devote my semester long online exhibition to S. A. Lane; transporting myself back to the America he witnessed during his 90 years on this planet, from 1815 to 1905.

Acting much like a time portal, the exhibit’s aim was to highlight some of the major events and marvels that peppered the years of Lane’s life. The topics I chose were: 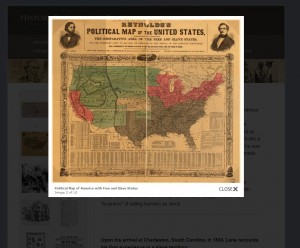 and were based both on Lane’s experience with each topic as well as the overall impact these facets had on America during that time. My goal in this exhibit is to discuss each topic based on my own academic research while simultaneously displaying, through Lane’s own words, how these major historical events and marvels wove themselves into the fibers of an average American’s tale. If Lane did not discuss a certain event within the pages of his manuscript (i.e. the Civil War) in any great detail, I did not include it in the exhibit. Similarly, it was impossible to research every aspect of Lane’s life. Topics like Mormon and Native American Life as well as 19th century health issues were aspects of American society represented in Lane’s writing, but limited time did not afford them a place in the final cut. It was my hope to have the exhibit act more as a doorway into the life of Lane rather than it be the entire homestead; allowing each visitor to customize their own entrance into his life and perhaps become as entranced as I was in his entire first-person narrative. 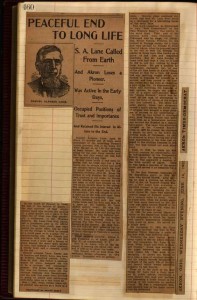 Looking back at the many weeks I spent “living” in the 19th century, I have found myself most intrigued with the “human” aspect of this venture. I found it difficult, if not impossible, to read the lines I transcribed without being reminded that at one time, Lane was scribbling down his own personal thoughts and remembrances, perhaps in hopes that someone like myself in the future would find his life events interesting enough to preserve and, above all, appreciate. In many ways, this project served as a way to immortalize a man whose achievements and thoughts could have easily been swept away in the tides of time. Lane’s endearing anecdotes and genuinely kind character helped anchor his memory in the tumultuous current of history and it was no wonder that I found myself cheering for his successes and sympathizing with his tragedies. These emotions I felt during this project made Lane’s life in America during the 19th century almost tangible, proving that I did indeed “travel back in time”.

I would like to thank the following collaborators and supporters of this project. Without their help and devotion, I would not have been able to accomplish so much: Ward Barnes, David Burke, Brittany Dudas, Michael Foight, Sue Ottignon, Teri Ann Pirone, Andrea Reed and Stephen Spatz.