The Blues — Celebrated by Students, Faculty, Librarians and Student Life 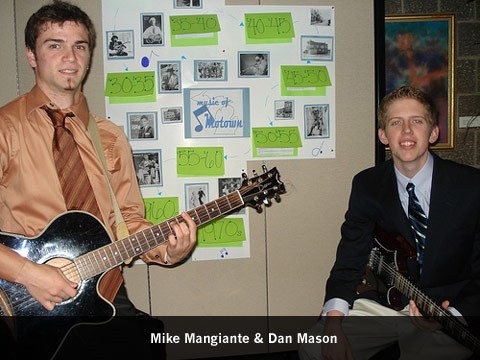 It’s the spirit of African-American anguish, rebellion and survival. It’s beans ‘n’ cornbread. It’s the zoot suit. It’s the sound of the Mississippi Delta, Chicago and even England. It’s the devil’s music. It’s the blues!

On March 30, Katharine Hall residents, along with their Augustine & Culture Seminar (ACS) instructors and guests, celebrated their appreciation of the blues. The evening opened with a Blues Museum in which students showcased their work, while Stephen Spatz of Falvey Memorial Library played selections from his 3,000-plus blues LPs on the turntable.

The participating ACS students were enrolled in one of the Katharine Hall Learning Communities, and their course instructors were Professors Ruth Anolik, Rachel Baard, Noël Dolan, Nancy Kelley and Bernard G. Prusak.

A VITAL minigrant, awarded in spring 2008, with funding from the Center for Liberal Education (VCLE)  and the Office of Student Life, supported the students’ innovative and interdisciplinary course work and research. The minigrant made possible a series of planning meetings during the summer and academic year that paved the way for this truly collaborative venture.

Parris Bradley, the theatre department’s technical director, brought live blues music and lore to the classes. Falvey librarians Jutta Seibert and Barbara Quintiliano provided research support by making students aware of the wealth of library resources available to them, such as the ARTstor database of images and photos. Cathy Kolongowski, Center for Instructional Technologies, offered technical expertise to make the Blues Museum a success, and she also took photos, now posted on the All About Katharine WebCT site that she created and maintains.

According to Dr. Kelley, “The best thing about the Blues Museum and Dinner was the unique energy and collaboration among ACS faculty, Falvey librarians, Cathy Kolongowski as our technological support and inspiration, and Parris Bradley’s expertise both with the history of the blues and the five instruments he played with his band. After researching and presenting various aspects of the blues, the Katharine Learning Communities enjoyed a truly interdisciplinary experience, along with a most creative Southern meal while listening to the best of the blues music. Active, engaged learning doesn’t get much better than this!”