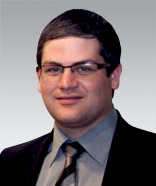 Christopher Barr, who had been the interface and design specialist for Falvey Memorial Library, has been appointed team leader and designer for the library online environment by Library Director Joe Lucia. David Lacey, library software development specialist, and Jiuning Zhong, a graduate assistant, also joined the new team. Chris and his team will work on VuFind and the development of new applications for the Library web.

Chris partnered with Andrew Nagy to develop VuFind which won a 2008 Mellon Award for Technology Cooperation.

Chris serves on the Library’s publications and digital library teams and on the management policy group.

In 2007, Chris came to Falvey with a master of fine arts in media studies from the University at Buffalo (SUNY). While at UB, he worked in the university libraries’ Educational Technology Center. Before attending graduate school, Chris spent two years as an electronic media specialist with BlaineTurner Advertising, and, before that, was a graphic designer for West Virginia Virtual Environments Lab.

He is also an artist whose works have been exhibited nationally and internationally.