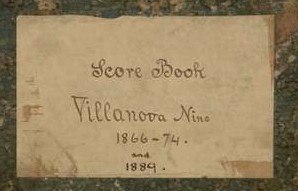 Students at Villanova College played baseball, and indeed had great sport at playing other teams. Not only did they play other local colleges but they also played amateur teams, like the St. Charles Seminary team, throughout the Mid-Atlantic region. Two newly digitized scorebooks document these early Villanova College baseball games and show the historic development of collegiate baseball. Indeed the earliest recorded Villanova game of the “Villanova 9” just after the end of the U.S. Civil War, November 12, 1866 was a great blowout with the Villanova College team scoring a winning 46 runs to 13 against the amateur team, the “Picked Nine”.

As part of the growing Athletics Collection of the Villanova Digital Library, these box scores allow the reader to visualize the games as they transpired. 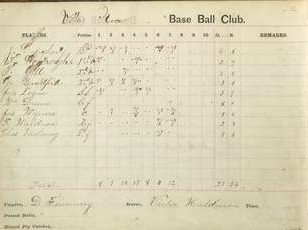 There is no one method of scoring a baseball game. Many different methods prevailed during the development of the modern game. In 1874 Henry Chadwick, known as the father of baseball score keeping, noted, “It is about time that one system of scoring should be adapted throughout the country” [Dickson, 9]. That development never happened, as different publishers produced competing versions. From the 1860’s to the mid-1890, Villanova used a more free form of scorebook, but Villanova scorers switched to the more detailed Caylor System in the late 1899s that included the now common “box score” for recording hits, runs, and fielding outs. The first known scorecard for a professional game was produced for the game between the Brooklyn Atlantics and the Philadelphia Athletics on October 11, 1866 [Light, 832]. Collegiate records are much more fragmented, but the dates of these Villanova scorebooks makes them among the earliest in the country.

Scorebooks remain an essential part of documenting athletic competitions. Indeed today every major league baseball game is required to have an official scorekeeper and scorebook [Light, 833]. 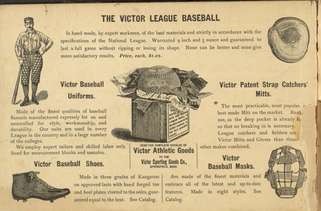 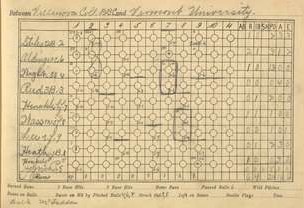 Paul Dickson. The Joy of Keeping Score: How scoring the game has influenced and enhanced the history of baseball. New York: Walker and Company, 2007.