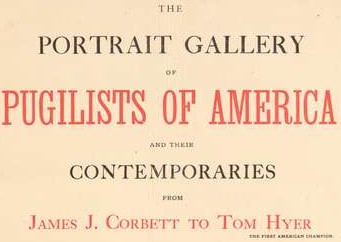 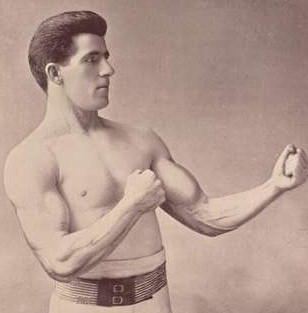 The reigning champion of the world of boxing in 1894 was Gentleman Jim Corbett. Or was he? Corbett was one of the first to treat the sport of boxing as a science and did much to create the modern sport, moving the contest from bare knuckled brawlers of prior days to more “gentle” gloved boxers of the 20th century. 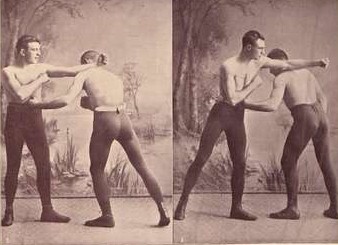 The Pugilistic Publishing Company of Philadelphia was one of the promoters of this movement toward a more educated sport. In 1894, they published a glamorous large photograph laden volume: Portrait gallery of pugilists of America and their contemporaries from James J. Corbett to Tom Hyer. This title features sketches and photographs of famous current fighters, not just from America but from around the world. These oft mustachioed men performed with a theatrical air, even applying makeup before a match, and are somewhat reminiscent of the modern World Wide Wrestling scene. With ear grabbing sobriquets like: “The Marine”, Professor Clark, “The Cleveland Trumpeter”, Sailor Brown, “The Ithica Giant”, “The Brooklyn Strong Boy”, “The Prussian”, “The Nonpareil “, and “The Thunderbolt”, these were the sports celebrities of the Gilded Age. Contained within this title also are a number of plates detailing and describing the best of the modern boxing and footwork techniques. 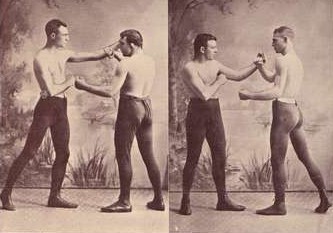 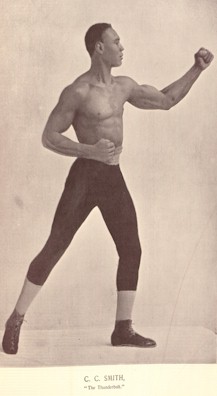 Like other historical cultural objects this book is a product of the times that created it. At that point in time, race divided and segregated athletes. This book does include boxers of different races and nationalities, but the irrational prejudices that still pervaded the sport can be seen manifested in the ways that awards and boxing titles were awarded and contests scheduled. While Jim Corbett is titled the “World Champion”, George Godfrey is given the title “First Colored Heavy-Weight Champion of America”. Indeed, the white boxer John L. Sullivan refused to fight Godfrey for the championship because of his race. So who was really the best boxer of the bare knuckle era? The defining competition never took place so we can only speculate.