Speaking to an audience of approximately 45 people, David Barrett, Ph.D., discussed the significance of national security issues in the current presidential elections. 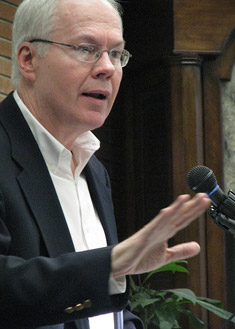 “National security issues are important in the presidential election and campaign and should be considered by voters, but the current economic crisis has overshadowed this concern,” said Barrett.

His talk “National Security and the Election,” that took place on Oct. 23, was the third in the 2008 U.S. Presidential Election series.

Dr. Barrett, professor of political science, has been teaching at Villanova University for the past nineteen years. He teaches undergraduate and graduate courses in the areas of national security policy, U.S. intelligence and the U.S. presidency. In recent years, his research interests have focused on the U.S. Presidents, Congress and the CIA.

Drawing from his book, The CIA and Congress: The Untold Story From Truman to Kennedy, Dr. Barrett explained how candidates can present some issues as more important than others to voters. It is easier to talk about illegal immigrants than it is about restructuring the way intelligence agencies work or don’t work.

Dr. Barrett talked about how national security challenges and issues such as Iraq, Afghanistan, North Korea and Iran are very hard to solve, which is why candidates tend to either oversimplify or over promise solutions. As a result, “national security issues are not a top concern for voters in this election,” he said.